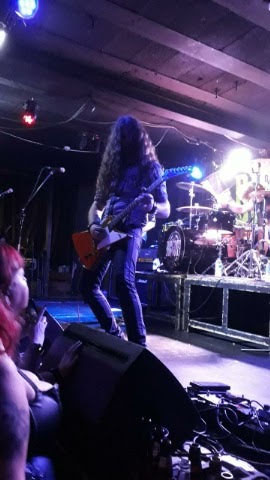 So a week after we said farewell to a band I really thought would make it, there are still a lot of mixed emotions flying around my head from their two hour gig at Rebellion in Manchester. From seeing them first at the SOS Festival in 2014 they have come on in leaps and bounds in songwriting and stagecraft as a sold out venue was in fine voice throughout and it was good to see a lot of them there to see the support acts Fahran and Pete Spiby And The Beat Alls. Even with limited stage room, Fahran delivered a high energy set, featuring five songs from latest album Vapours as one, two knockout blows came from the guitar overload of ‘Home’ and the huge choruses of ‘Stand Alone’ with the drumming from Josh Windsor looking more like a gym workout!

It’s been a few years since I’ve seen Pete Spiby, the last was with Black Spiders and his set was gritty rock delivered with total conviction, bringing to mind Bruce Springsteen, Neil Young and Clutch as ‘Friday Nights’ saw a guest appearance on guitar from Sam Millar.

Bigfoot arrived onstage to deafening roars as they opened up with a full on ‘Tell Me A Lie’ and headed straight into a punchy ‘Eat Your Words’ with lead vocalist Sean Seabrook soaked in sweat from the off. There was definitely an air of celebration in the air on and offstage especially with the hilarious piss taking from guitarists Sam Millar and Mick McCullagh. The set flew by far too quickly and highlights were many, especially ‘Stone Soldiers’ and ‘Tie Me Down’ but the run in towards the end of the gig was over the top to say the least. Covers of ‘The Time Of My Life’ and the theme from ‘Top Gun’ preceded a magical ‘The Other Side Of Paradise’. ‘Forever Alone’ saw the band and crowd as one for a power ballad to end all power ballads followed by a riff heavy ‘The Fear’. 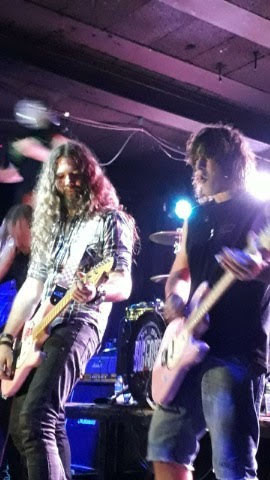 Party levels were raised as Sam and Mick came on with their pink Little Kitty guitars for a duel as Sam’s brother Matt then battled with Mick followed by Chris Byrne and Jake Graham from Fahran to show their prowess along with drummer Josh Windsor to smash the shit out of Tom Aspinalls kit but Tom hilariously grabbed a guitar for a rendition of the ‘Smoke On The Water’ main riff. A metallic cover of ‘Hot Stuff’ saw the band chuck out a load of blow up dolls in the crowd. ‘Blame It On The Dog’ saw the refrain of “Smells like shit” belted out by the crowd as an air of poignancy came as each member of the band gave a speech. On the whole they were pretty upbeat but a tearful one from bass guitarist Matt Avery hit the hardest. Unfortunately we had to rush off for our last train and missed the final song ‘Uninvited’.