Despite its remote location – in the crook of north Wales’ Llŷn Peninsula, between Snowdonia and the Irish Sea – Hard Rock Hell is undoubtedly one of the UK’s favourite festivals, often booking out a year in advance… and even before a single band is announced!  That was evinced yet again this year, when thousands of rockers and metallians of all shades of taste, from melodic parping through to the most extreme practitioners of the dark arts, descended on the beautifully appointed Hafan-Y-Mor holiday camp on the outskirts of the Gwynedd market town of Pwllheli, for the latest installment of the HRH United extravaganza, which once again combined the delights of HRH AOR  with the moshtastic Hammerfest, with ancillary stages devoted to doom, sleaze, stoner and thrash.

What is billed as the ‘Pre-Party’ is virtually an stand alone event in its own right now, with seven bands on the main arena stage.  It is perhaps a bit much, especially with two of the acts appearing in the wee small hours of the morning, bearing in mind that, like your PM team, many of the early comers had travelled many hundreds of miles and spent many long hours on the road… but, that’s something we’ll come back to later on…

The task of getting this year’s party started falls to rising Glaswegian trio The Toi, who deliver blues-edged melodic rock with a great sense of pop harmonies and a connectivity between the tightness of the songwriting and the soulfulness of its performance, and they ‘Come Alive’ and ‘Get It On’ in energetic style.  Following a (surprisingly) beautiful and laconic version of ‘Black Velvet’, frontman Paul Healy talks frankly about the changes the band have undergone since releasing their debut album, ‘Water Into Wine’, back in 2013, especially his own battle with throat cancer, but also does so with a typically engaging Scottish sense of humour.  The trio then debut a new song, ‘Forever And Always’, which is suitably honest and touching, it’s classic AOR style perfect for opening this stage, while closer ‘Till The Morning Comes’ (which Healy dedicates to “anyone who has ever fallen in love”) has a sexy bump and grind to its dark groove. (7)

Setlist:  Come Alive /Get It On / The One / I’m Still Crying / Judas / Black Velvet / Forever And Always / Till The Morning Comes 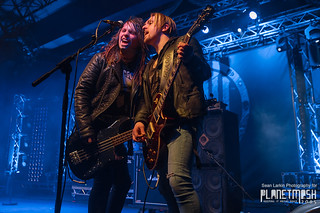 Swansea’s Beautiful Strangers start well with the heavy, crunching, sleazy blooze of ‘Circles In The Sand’.  They lose momentum with an overlong gap between the first and second songs, but quickly pick up the pace again with ‘Shame Shame Shame’, their tight, taut rhythms overtopped with weaving, intertwining guitar harmonies and melodies.  Vocalist Stuart Dade Davies has a grit and growl to his vocal which accentuates the bluesy edge of the underlying riffs, and a good stage presence to boot, not being intimadated in any way by what he decribes as the biggest crowd they’ve ever played to (“there must be, oh, 25 people here!”).  It’s a performances which well and truly whets the appetite for the quintet’s forthcoming pair of new EPs, due to be release later this year. (7)

Ireland’s Preachers Son deliver heavy, bottom-ended stoner blues rooted very firmly in the ’70s sound of Free, with elements of Zeppelin, Steppenwolf, Cream and Iron Butterfly. It’s a charismatic sound, with a dark, raw energy which is also captivating.  The majority of the audience fail to understand Brian Hogan’s Dublin brogue, or his jokes about potato crisps, but, of course, it’s the music that shines through, with its warmth and vibrancy.  There are inevitable comparisons between Hogan (a real life son of a preacher) and Phil Lynott, especially in his stage mannerisms, but PS are a unique prospect in their own right, and hopefully this appearance will go a long way towards helping them take the next steps along the road to fulfilling that promise. (7)

Setlist: Jam G / Round The Bend / Somebody Down / Weeping World / Should Have Been Gone / Little Miss / Get Me Some More / Johnny’s Alright / Come On / Jericho

Knock Out Kaine – a band who have been championed by certain other members of the PM team for some time now – up the energy level substantially with their trashy, sleaze fuelled pur rock ‘n’f’n’ roll.  It’s unusual see a band of this type drive their sound via acoustic guitar (very much in the vein of Tyketto), at least for the first half of the set, but it works and adds an extra dynamic.  ‘Back Street Romeo’ is ripped straight from GnR’s back catalogue, while their version of Steve Earle’s iconic ‘Copperhead Road’ is faitful and proficient (although it won’t be the last time this weekend that this reviewer wonders why so many bands insist of including cover versions in their sets, albeit to varying degrees of success) and new single ‘Cruel Britannia’ has a punky acidity.  Overall, the band are impressively energetic, tight and angst-ridden, and deliver a powerful performance showing that this is an impactful young band with a bright future. (8)

Headliners The Quireboys play rock ‘n’ roll.  Nothing more, nothing less.  And they do it bloody well, especially when they are on top form, such as they are tonight.  And if you think you can have ‘Too Much Of A Good Thing’ then you most definitely have been ‘Misled’ because this most definitely is ‘The Finer Stuff’.  ‘There She Goes Again’ gets the biggest pop of the night so far, but not before Spike has tried to convince everyone present that he’s sober – “I’ve just come from a wedding,” he says, referring to his white suit – by letting on he’s drinking only Coke:  “actually, I lied,” he says, holding his glass aloft, “it’s Diet Coke… I mean, have you seen Griff pour a vodka?!”.  Not that it matters whether or not he is drinking, or how much:  he is a commanding, confident and charismatic frontman, who knows exactly how to work a crowd – and get exactly what he needs, and wants, from them in return.  And, it’s a vibrant and energetic performance from both the frontman and his band of troubadours, one during which even ‘Mona Lisa Smiled’ and the assorted ‘Tramps And Thieves’ are singing and dancing along, with ‘Hey You’ as raucous as it should be each and every night.  It may be closer to midnight than ‘7 O’Clock’, but this particular rock ‘n’ roll party is most definitely in full swing and deservedly earns the first encore of the weekend.  (10)

Setlist: Black Mariah / Too Much Of A Good Thing / Misled / The Finer Stuff / There She Goes Again / Gracie B / This Is Rock N Roll / Mona Lisa Smiled / Tramps And Thieves / Hey You / Sweet Mary Ann / 7 O’Clock

Encore: I Don’t Love You Anymore / Fool To Cry / Don’t Bite The Hand

For many, however, the long day behind them means that the party, at least for now, is over, and the crowd has largely dissipated by the time Veronica ‘The V’ Freeman takes proceedings towards and past the witching hour.  And, it must be admitted, the majority of those left are mostly male, mostly likely attracted as much by her, shall we say, not unsubstantial “physical charms”.  Songs such as ‘Again’ and ‘Now Or Never’ sound stronger than on the album, but that is not to say that they are any more consistent.  Freeman is a singer in the mould of Anne Boleyn or Lee Aaron, but without the power and range of either, and as the set progresses there seem to be increasing problems with her delivery, with the sound being held together by Nigel Bailey’s bass and backing vocals.  Again, there’s a cover:  this time it’s Sabbath’s ‘Heaven And Hell’, which features a particularly gravelly and bottom-ended delivery from the singer, but doesn’t stem the increasing numbers heading for the doors and their cold caravan beds. (6)

The decision to put two bands on after the headliners really proves a bad one, at least as far as first night closers (or second day openers?) Captain Black Beard are concerned, as they take to stage at 1am!  There are only a handful of diehards left dotted around the arena to enjoy the Stockholm quartet’s driving chunky blues rock, which is delivered with plenty of bottom end and an enthusiasm which belies the lateness (or earliness) of the hour.  Their sound is reminiscent of countrymen Electric Boys, but without the funk and heavier vibes, with elements of Thin Lizzy and a West Coast psychedelic vibe which definitely keeps those of us who have stuck it through to the end entertained in our fight to enjoy every last drop of the sweat and blood-fuelled passion of this latest chapter of HRH. (7)

Setlist: New York City / Divided Feelings / Music Man / Aiming For Love / She’s The One / Coast To Coast / Somebody / Take Me To The City / All I Need / Don’t Turn Your Back On Love

And so we came to the end of the first night of this three night extravangza, with the eclectic nature of the opening bill reflecting the diversity of what was to come over the rest of the weekend.