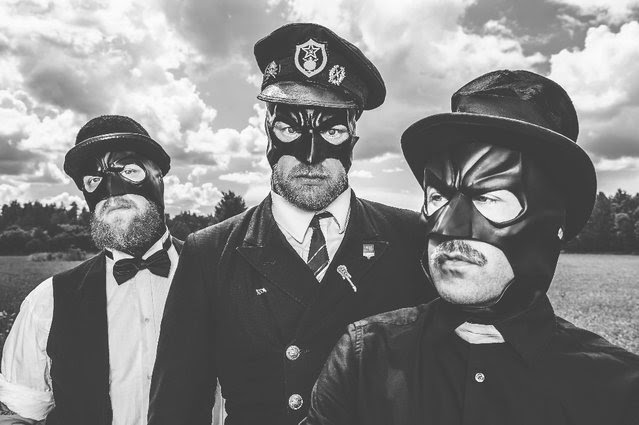 It’s the first Friday in the month, it means a new Guilty Pleasure by Märvel. This time the band has Märvelized Monster Magnets classic hit Power Trip. The Swedish power-trio have filled the track with energy and kept original songs groove. Power Trip is perhaps best known for being a monster hit of the ’90s. Märvel, however, shows that the song is more than just a ’90s throwback, its a great piece of Rock N Roll.

The first Friday each month Märvel is releasing a new track from their upcoming album Guilty Pleasure. The song is preceded by a music quiz about the upcoming song on the band’s facebook page. The first of February the band releases their version of Monster Magnets hit Power Trip. Earlier the band have released Guilty Pleasures as Dire Straits – Sultans of Swing, REO Speedwagon – Keep Pushin’ and Rick Derringer – Rock & Roll, Hoochie Koo. The album Guilty Pleasure is out 12th of April on The Sign Records.

The upcoming album is released by The Sign Records in the spring of 2019. The album’s called ‘Guilty Pleasures‘ and contains 10 great songs that have all been given the Märvel rock ‘n’ roll upgrade. We know you like the tracks even if you perhaps don‘t admit to it yet. The band is currently hosting a rock quiz on their facebook page counting down the days up until they expose their next GUILTY PLEASURE – with a new song released the first Friday in each month up until the album release. Märvel released their latest album ‘At the Sunshine Factory‘ in 2017 on The Sign Records. Before that the band have had successes with albums such as ‘Warhawks of War‘ (Killer Cobra Records), ‘Hadal Zone Express‘ (KCR) and ‘The Hills Have Eyes‘ (KCR). The band is today one of the most popular rock ‘n’ roll experiences a stage can host in Scandinavia.

A guilty pleasure is something, such as a film, a television program or a piece of music, that one enjoys despite feeling that it is not generally held in high regard, or is seen as unusual or weird. For example, a person may secretly like a movie knowing that the movie is poorly made and generally seen as “not good.” (Märvelpedia)

The new album will be released by The Sign Records during the spring of 2019.

I first went to a gig in 1981, Gillan at Leeds University. I've been a regular gig goer ever since. I haven't kept count of how many gigs I've been to over the intervening years, but it's a lot! My favourite bands are AC/DC then, in no particular order, Anti-Nowhere League, Slaughter and the Dogs, Towers of London and Dirt Box Disco. I tend to like Glam/Punk and rude offensive lyrics, not sure what that says about me but as Animal would say 'So What!' The question was recently put to me - did I write for any online publications? My reply - No, but I'd like to! Planetmosh was suggested and I found myself offering to review Aces High Festival. Easy peasy I thought! Well not quite, if a jobs worth doing it's worth doing well! I had sixteen bands to research. I found I actually enjoyed that and it kept me too busy to be making lunatic comments on Facebook! ;) Then I felt a bit inadequately qualified. I mean, who am I to comment on others, when my musical expertise extends to being able to play a mean Greensleeves on the recorder and a passable Annie's song on the flute! Haven't picked up either instrument for years! What I do have, however, is over 30 years of experience as a gig goer, so I can comment on what I like and what I don't! It's only my opinion and, if I don't like a band it doesn't mean they are bad, just not to my own liking. I admire anyone who has the guts to get up on that stage and have a go!
@2296928222
Previous Chalice Of Suffering – Lost Eternally
Next Skunk Anansie – 25live@25